The all-new Nissan X-Trail has been leaked in a pair of sketches, filed with Brazil’s patent office. The current model has been on sale in the UK for six years so an all-new version is in the pipeline for 2022.

Cosmetic updates fall in-line with Nissan’s latest design language, drawing inspiration from the new Juke. Like the firm’s compact crossover, the new X-Trail will adopt a pair of slim daytime running lights with separate headlamp units below. The radiator grille is also wider than the outgoing X-Trail’s, but it retains Nissan’s trademark U-shaped surround.

The rear three-quarter image of the fourth-generation X-Trail looks surprisingly familiar. The doors and tailgate appear to be a subtle update of the outgoing model’s, although there’s a new tailgate spoiler and “double-bubble” roof. The wheel arch and door plastics have been redesigned, too, along with the rear lamps. 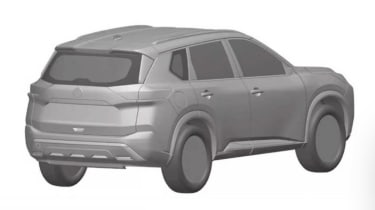 Like the upcoming third-generation Qashqai, the X-Trail will be based on an updated version of Nissan’s CMF underpinnings. That means a new generation of hybrid powertrain could be made available: one using Nissan’s innovative ePower system. This a series hybrid system that uses a petrol engine working as a generator to charge the battery pack, which then powers an electric motor.

Nissan has access to use the plug-in hybrid setup used in the Mitsubishi Outlander PHEV as part of its membership of the Renault-Nissan-Mitsubishi alliance, but engineers and executives have recently distanced the firm from using plug-in hybrid tech, preferring to leap straight to full-electric power when possible.

Nissan also recently confirmed that production of the new Nissan X-Trail will move from Sunderland to the company’s main production facility in Kyushu, Japan. The company cited production optimisation, Brexit uncertainty and “changing emissions regulations” as motivators for the upheaval.

However, Nissan recently invested £400 million at its Sunderland facility, in preparation for production of the third-generation Qashqai later this year. The factory will continue to produce both the Qashqai and the Juke, supporting around 7,000 jobs.

What do you make of the fourth-generation Nissan X-Trail? Let us know in the comments section below…