Electric SUVs are in vogue at the moment, and at Volvo offshoot Polestar, a rival for the likes of the Tesla Model X, Audi e-tron and Jaguar I-Pace is firmly in the Swedish marque’s sights.

The third model in the line-up will follow company convention and be called the Polestar 3. It will be a zero-emissions SUV tasked with carving out a unique identity for the company when it arrives in 2022.

To that end, it’ll be among the first cars from Polestar and Volvo to use the new SPA2 platform for large cars. But more importantly, the Polestar 3 will continue the brand’s move away from Volvo design cues and be the first to establish Polestar’s design identity, Auto Express can reveal.

Design Director Max Missoni explained to us that the company’s recently revealed Precept Concept is a strong indication of what’s to come, and that the Polestar 3 SUV will be heavily inspired by it. “The next car that Polestar will launch is the Polestar 3,” said Missoni. “It will be a high-performance SUV that is a different car in its bodystyle, but I would say the Precept serves as a precursor to the design language that you will see in that car.”

Missoni also confirmed that the Precept’s interior and infotainment preview what comes next inside. “This is quite a realistic statement of our future,” he stressed.

Missoni explained how Polestar has gradually separated from Volvo from a styling perspective. According to the design chief, while the Polestar 1 was based heavily on the Volvo Concept Coupé from 2013, the Polestar 2 represented a parting of the ways. The Polestar 3 will be “the next bigger step” and our exclusive images preview how it could look two years from now. It’s expected to use some, but not all, of the Precept’s design cues, and repackage them as a coupé-like SUV, not unlike the Jaguar I-Pace.

The swooping shape is an important factor. The Polestar 3 will arrive at around the same time as the all-electric version of the next-generation Volvo XC90, which is also due in 2022 based on the same architecture. The two cars will share the same chassis and battery technology, while a range of 310 miles has been rumoured for the Polestar 3 in the past.

However, while Volvo’s electric SUV will major on ride comfort, the Polestar version will have sportier chassis settings. Missoni claims that it will be a performance SUV, so the Polestar 3 is likely to use a more powerful dual-electric motor set-up, too.

The new SPA2 platform is an evolution of SPA1 and it has been designed to cater for cars including the next S60 and V60, as well as the larger S90 and V90 models. Smaller Volvos and Polestars, such as the 2, use the CMA architecture, which will underpin an electric version of the XC40, which is coming later this year.

While most of the technical limitations of the smaller CMA platform are already known, SPA2 is a totally new step. On the Polestar 3 and next XC90, Volvo will introduce a range of fully electric powertrains, as well as a new Google-based electronics system. The tech giant’s extensive mapping data will be built into the cars alongside new advanced driver-assistance features, which will include the latest semi-autonomous driving capabilities. 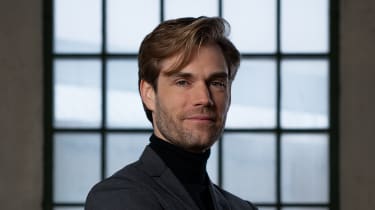 A graduate of London’s Royal College of Art, Max Missoni has been working at Volvo and Polestar since 2012, having begun his career in car design at Volkswagen in Wolfsburg.

A : “If you look at Polestar 1, it’s based on the Volvo Concept Coupé, which is no surprise. But Polestar 2 is already the first step into a unique Polestar design language. And then there’s the Precept. It’s the next bigger step, and that will lead us to Polestar 3.”

Q: What’s it like creating and establishing a design language for a new car brand?

A: “It’s a big challenge to create a language for a product that does not infringe on anyone else but that has its own very strong character, and to make that successful within the market. At the same time, we did look at staying somewhat connected within the Volvo family aesthetically. We wanted to make a big step, but still show that evolution.”

Q: What happens after Polestar 3?

A  “There has to be a certain amount of freedom so the team knows how to evolve the design language over the next couple of cars. Polestar is a very young brand. Let’s see how it evolves over the coming years.”

Are you excited by Polestar’s re-invention as a standalone brand? Can it tame Tesla? Let us know below…